Focus on
Bosnia and Herzegovina 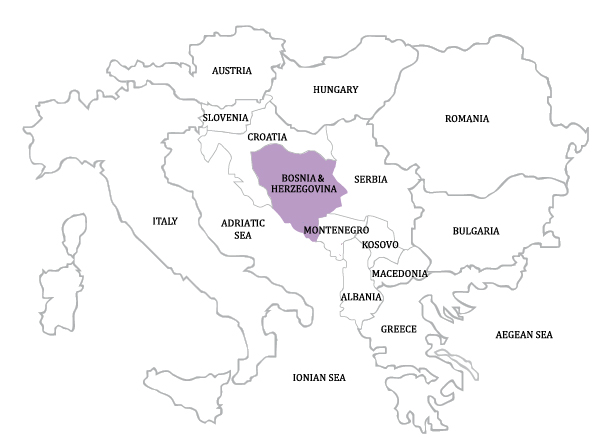 From the year 2006 Bosnian Institute of Intellectual property succeed activities in this field which were previously performed by Institute for Standardization, Metrology, and Intellectual Property of Bosnia and Herzegovina which was established on October 1, 1992, the same year Bosnia became independent from Yugoslavia.
The inner organization of the IPO reflects the regional divisions – having Bosnian IPO situated in 3 locations (the headquarters is in Mostar, and offices in Banja Luka and Sarajevo – the capital), each focusing on different areas of IP matters.

Bosnia is a member of international organizations and agreements such as WIPO, PCT, Nice agreement on the international classification of goods and services, Hague agreement, Madrid Agreement of the International trade mark registration and EPO.

The Law on Trade marks does not provide the protection of non-traditional marks: e.g. sounds and scent marks are not registrable, only a graphical representation of the mark is acceptable.

Interestingly, one of the grounds for absolute refusal is that the sign cannot be protected as a trade mark if it is identical to an earlier trade mark application/registration for the same goods or services.

Usually, we find this under provisions for relative, not absolute grounds for refusal.

If the IPOs Decision in a trade mark matter is unsatisfactory, it is possible to file an appeal against the IPO’s decisions before the Appeals Commission of the IPO. If this Decision is still not to one’s satisfaction, the next step is to take the dispute before the Administrative Court.
The institution of appeals commission used to exist in other jurisdictions, but was abandoned (e.g. Serbia and Croatia).

Trade marks can be renewed 6 months before the renewal deadline at the earliest, and the grace   period is usual 6 months long

In Bosnia, if the opposition was filed unsuccessfully, the same reasons cannot constitute the basis for annulment later on – but new proof can be presented.

It is possible to file a consensual patent which corresponds to a utility model or a small patent in other ex-YU countries – In Bosnia there are no limitations regarding the number of patent claims.

It can be later converted into a regular one, by a substantial examination request filed by the end of 9th annuity.

Patent annuities can be paid 1 year before the deadline and the grace period is the usual 6 months.The time limit for filing a national phase of  PCT Application with the Institute is 34 months from the priority application date.

There is no grace period for renewals of design.

In Bosnia, POAs in all IP matters, only need to be simply signed, notarization/legalization is not required.